The other morning on the ferry, I sat with my friend and we were looking out the window at the scenery. He swore that he saw something in the water, and we started talking about what it could have been — a hopeful whale sighting, a bird, seals, or even a shark.

The conversation turned to sharks, and he told me how on his ocean dives he has come face to face with them, and one even curled up and slept in his friend’s outstretched hand. Apparently they leave you alone and don’t attack if you don’t provoke, much like bears and mountain lions and, well, any wild animal. But then he then told me a story about how when he was 15, he went to Florida with his family and was in the water and felt something bump up against his leg. A wave came, and it was filled with sharks — it was sharks bumping up against his legs! He said that his parents told him that he ran on the water, racing to get back to the shore. I shivered, deliciously frightened.

Of course I’m scared of sharks. How could anyone, of my generation particularly, not be? After all, if you were like me, you stared at this book cover on your dad’s nightstand:

I wasn’t allowed to see the movie, of course — I still don’t know if I’ve ever seen the whole thing, just pieces here and there. (No pun intended.) I did see Jaws 3-D in the theater and all I remember that it was super boring until the end when the shark comes crashing through the window. But the first one I was too young and wasn’t allowed to see it, so instead I just stared at the cover of my dad’s book, deliciously frightened, and thought the lady was stupid to be swimming naked and alone in the ocean.

I stared at books a lot when I was little — I mean I read them, but I was always fascinated by the pictures, especially my dad’s books. He traveled a lot and always had junky “airport books” and I was obsessed: The Amityville Horror, Raise the Titanic, and the the one that freaked me out the most: Scapegoat, the story of Bruno Richard Hauptmann, the apparent Lindbergh baby kidnapper and killer. I stared at the picture of the corpse of the Lindbergh baby until I couldn’t handle it anymore and would slam the book shut, only to open it back up and peek again, starting the cycle again, over and over. I was also obsessed with Time-Life’s The Birds, especially the photo of the owl fighting with the snake, and the fancy bird’s “headdress.”

Now lest you think I was a morbid child (not really, just dramatic), I liked not-so-gory things like Nancy Drew, and read them all and stared at all those photos, too. In fact, a lot of life lessons I learned from Nancy Drew: always carry an emergency $5 in your pocketbook, stop and eat in charming tearooms while wearing a smart frocks, you can write SOS backwards on a window with lipstick after you come to from getting knocked out with chloroform, and, oh yes, swim away from sharks, and quickly. 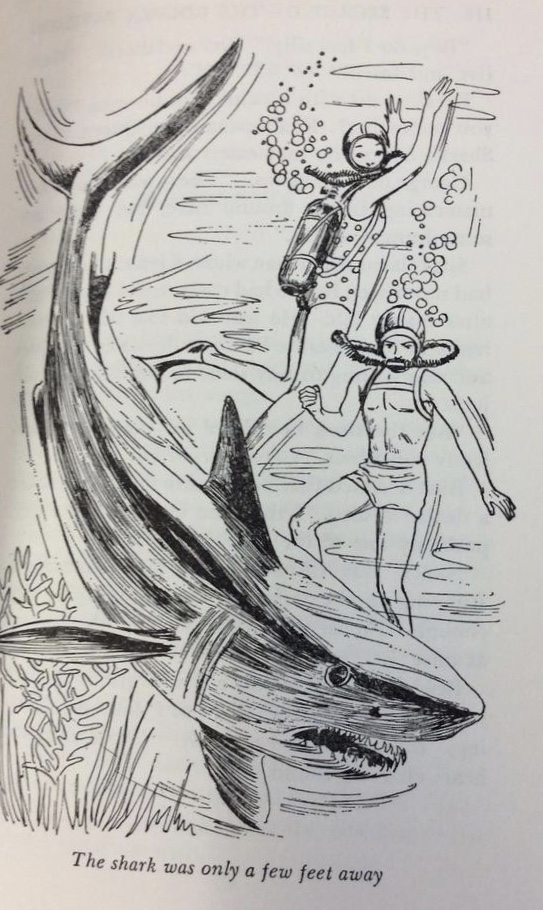 See, again, sharks! And who couldn’t be scared of them? You see on the news about surfers who get big chomps taken out of them, their limbs eaten, etc. It’s never a heartwarming story about sharks — it’s always an “attack.” (https://www.youtube.com/watch?v=5FU2Wn5r2_g)

But as I was talking to my friend on the ferry, I had an epiphany. I will never in my life come face to face with a shark. I will never surf, I will never be in the ocean where they are, I will never be attacked by one. I don’t need to be afraid of sharks. I’m afraid of a lot of things, so taking that fear off my list felt like a metaphorical weight lifted.

It felt like a mid-life epiphany, that I only have so many years left, and all these things that I have carried with me all these years like a fear of sharks and kidnapping (pfft) can now be shed like old skin. I mean, I’m not actively scared of sharks or kidnapping or anything like that, but it was just a long held belief that has been in my head. And it was gone. I felt delighted and lighter, and wondered what other “psychic clutter” I could get rid of.

I was so pleased with my new idea that I got to work and told my “work sister” about it. “No,” she said. “Sorry, but you take a ferry on the Bay every day. There is still a good chance you could come face to face with a shark.”

But honestly, I think that if there was a ferry accident I would be more likely to be freaked out about everything else happening more than a shark, so there’s that. So now where the “fear of sharks” had fallen off my list, it just opened some mental space for another fear about something that could potentially happen. But at least there’s now room for that in my head, right? Sure.

Anyway, I’m no longer afraid of sharks because I don’t have to be. Maybe this will translate to something deeper and more spiritual, or maybe it will be just what it is: kind of dumb and that’s just the way it is. And I’m fine with that. 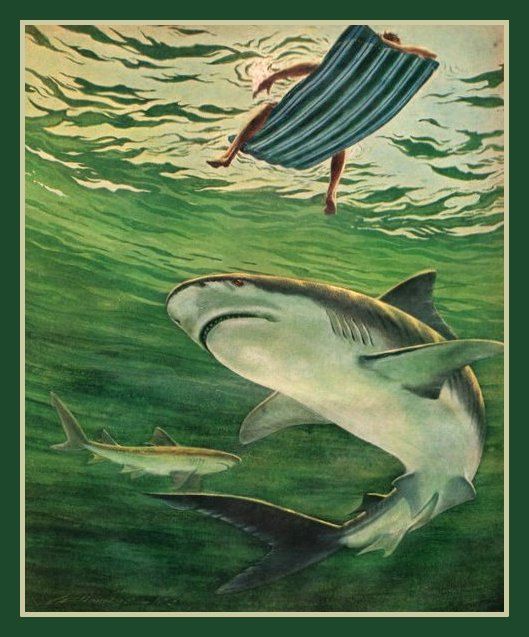