So tomorrow is Record Store Day, where a bunch of people basically cash mob record stores.  There are all sorts of limited editions and fancy stuff that is only available on that day — some people like it, some people hate it.  I don’t care about limited editions, because I don’t really know any modern bands, and I’m not a collector. But I like the whole idea of Record Store Day because I love people coming together and shopping in record stores, places that were once staples and now thanks to the internet and iTunes, are struggling much like bookstores.

Last year I happened to be in Birmingham, Alabama and went to Charlemagne Records, where I always go when I’m there. (I always buy a used George Shearing record.  It’s my souvenir, and they always have a ton. And the songs and covers are so great!) There are usually two other people in the store, max — usually it’s just me, poking in the bins. But on Record Store Day, it was packed! Everyone was having a good time, and it was fabulous.  (I bought a George Shearing record, of course.  And a Keely Smith for good measure.)

So if you’re lucky enough to still have a record store in your town, go show them some love.  And may I suggest one of my all-time favorite records? 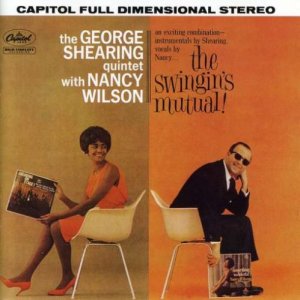 I swear, this album makes me feel glad to be alive.  And makes me want to sip a cocktail in a smoky nightclub, circa 1962.  SO good!

Go give your local record store — or any independent local store — some love tomorrow.  I wish we didn’t have to have things like Record Store Day or Bookstore Day to keep these businesses going — as far as I’m concerned, every day should be Record Store Day.  But at least there’s a day to celebrate, right?  Viva la Vinyl!

One thought on “Record Store Day!”