Yes, I’ve missed a few days, and I’ve really wanted to write, but I’ll catch up…  I do have a good excuse — I’m in New York!  And there hasn’t been a lot of downtime.  I’m here for a conference which was last night, but now I’m off for a few days to see friends and run around.

I love New York.  In college, when going to NYC was just a distant (but determined) dream, I had this print hanging on my dorm room wall, bought from Z-Gallerie because I was, you know, so sophisticated (pffft): 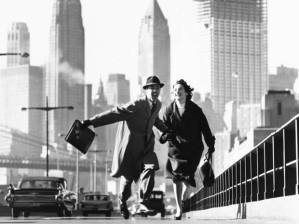 So I looked at that every day, and always thought of New York as somewhere that was a combination of that,books like Eloise and From the Mixed-Up Files of Mrs. Basil E Frankweiler, movies like The Warriors, Desperately Seeking Susan, Times Square, and Annie Hall, Andy Warhol’s Factory, a lot of traffic, and snippets I saw on David Letterman when Larry “Bud” Melman would report from the street. And, of course, my fascination with Dorothy Parker and The Algonquin Round Table (which had been ingrained at a probably too early age). In other words, I thought New York was a gritty, fabulous heaven — filled with danger and excitement and glamour and interesting people.  In retrospect, I wasn’t that wrong.

I didn’t get to New York until right after 9/11, and that trip was extraordinary.  I went with a group of friends, and they knew the city so I had great guides.  I was shown all the things I wanted to see and wonderful things I didn’t even know existed.  I was so so lucky to have such a magical first trip.

And in the dozens of times I’ve been back since then, it is still magical.  I never get jaded — when I see the skyline I still get so excited, and I remember the first time driving into NYC.  We flew into Newark and when we came out of The Holland Tunnel, we all smelled something strange.  “What is that?” we asked the cab driver.  He looked at us and said, “Bodies.”  Sure enough, the WTC was still burning, and the city smelled like a giant crematorium.  That still seems unbelievable to me.  But I was so amazed by everything I was seeing — I felt like an eight-year-old.  I also had a broken toe and was limping around, so I was SUCH a goober.

Now I pretend that I’m a little more savvy, and I do know my way around fairly well (well, better than I did 14 years ago), but I still feel like an eight-year-old.  I look up at The Chrysler building and want to scream with glee.  I ate in The Oyster Bar the other night for the first time in about 6 years and was still bouncing in my seat.  And don’t get me started about The sacred Algonquin — that’s another post for later.

So…  I’m off to explore glorious architecture and have a fabulous lunch and head off to Brooklyn…  I may have skipped 2 days, but living and experiencing is good, too.  Biting the big apple and all that…