I thought that this would be as good a time as any to start getting this site going — poor thing, it’s been languishing for months. I was so excited when I decided to start a website, all focused on my writing. I was so pleased with myself when I bought my URL, putting my name up in lights. (Except I have the same name as a performance artist, so if you’re looking for THAT Karen Finley, you might want to check somewhere else.) I fiddled around on WordPress, wondering how I could make this look so professional, and like a website a real writer would have and of which I could be proud. I made a couple of tweaks and sat back to write my first post and… Nothing.

Nothing came into my head. Crickets. How could I make myself sound like a professional writer? (I am, you know. I got paid $20 one time. That makes me bona fide.) How could I suddenly sound like a super smart, creative and talented artist, when really what I tend to write about is stuff like my dreams about pick-pocketing guinea pigs (no, I don’t know what I had for dinner that night), what happened when I got my period for the first time (in white Calvin Klein jeans, no less), and how my life is unfulfilled because I never got the starring role in “Annie” (even though I never even tried out)? Yeah, I was in a quandary. What if I did write about that stuff, and Very Important People found this website and read it and thought, “Oh my GOD, this person is a total doofus” and then what would happen? Probably absolutely nothing, but I got a case of website-writer’s block.

Then I realized: it’s not writer’s block at all — it’s AUTHOR PHOTO BLOCK! You see, I don’t have any professional photos to put on my header, the kind that people would look at and think, “Ohhhh, she’s smart. She must be a writer!” You know, tasteful black & white, airbrushed, hand under chin, looking pensive yet amused, and maybe posed in front of a shelf of curated books — a few Pulitzer winners, some respected good sellers, a token Joan Didion, and then something whimsical. I don’t have that. I need to get that. I need to have a fancy photo taken of myself, though the hand under my chin would be to masquerade the double-ness of it, not because I’m pensive. And my bookshelf would consist of books like “Valley of the Dolls,” “One Lifetime is Not Enough” by Zsa Zsa Gabor, and “Harriet the Spy.” Sigh.

So I really need to work with what I have, which are obnoxious Facebook profile pictures mostly taken with phones in ridiculous situations, instead of with a professional camera and good lighting. And I’m leaving it up to YOU, dear reader(s), to choose one. Which one shows the best facet of my personality and makes me look like a professional author?

So, here are the choices.

This one makes me look literary, don’t you think? I’m a Beatnik. It was my Halloween costume, which is a better choice than when I was Little Edie Beale or a Zombie Tupperware Lady. When a trick-or-treater who came to the door asked me what I was, I tried to explain and just gave up. Because every six year old wants to know about a group of disenfranchised people who wrote and drank and did drugs in the 1950’s, right? Had she been 12, maybe it would have been more interesting. (By the way, she was a butterfly/ladybug mash-up.) Anyway, I think this photo really demonstrates how smart and well-read I am and stuff.

Bathtub photos are always the height of glamour, and this one is no exception. This is me in LIBERACE’S BATHTUB. Yes, THAT Liberace. My friends were invited to a fancy party at Liberace’s mansion in Las Vegas, and I happened to be in Las Vegas so I tagged along, mostly so I could get this very picture. It was all roped off, but I figured if I were going to get arrested for anything in life, it would be for breaking and entering in Liberace’s bathroom. So while the coast was clear, I convinced a stranger to take my picture (which he did grudgingly) and as soon as he did, a docent came and busted me. I didn’t get arrested, but I did get this photo, so it was a win-win. I think this photo shows my adventurous side.

My friends and I have a monthly supper club, where we go out to dinner at fine dining establishments (that have been around since pre-1975 or so). We get all gussied up, and sample delicious cuisine. On his particular night, we shared two desserts: one was called “Flaming Cream” or something that had magnificent presentation as it was served ON FIRE, though it tasted like a burnt sofa cushion. As backup we got chocolate cake, and as I learned from my friend Kitty, smiling and posing while eating chocolate cake is always a crowd pleaser. This photo illustrates my exquisite taste in food and just how photogenic I am.

This photo was taken the night we got back from our honeymoon, and already planning our next trip. Though nothing could top our “Huell Howser Honeymoon” — a night at The Madonna Inn, the next night at The Wigwam Motel on Route 66, a few days in Palm Springs (where I got this fabulous hat), then a couple nights in glamorous Beverly Hills. It was, as Huell said, “A-MAH-ZING!” This photo definitely portrays me as an intrepid traveler with impeccable fashion sense.

I have to say, this is my favorite photo of me — it’s the most flattering and I don’t have to worry about soft lighting and chins. It shows my can-do attitude, that I’m always enthusiastic and give life an eternal thumbs up. (Actually it shows that I shouldn’t have cocktails before lunch.) 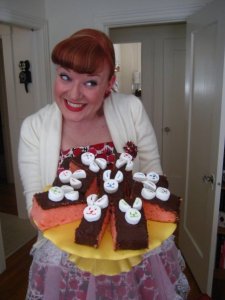 One of my most favorite things to do is host potlucks where we all re-create old recipes from the 1940’s thru the 1970’s, with often hilarious results. I personally like it because I’m not the greatest gourmet, but most of that food tastes terrible anyway so I get a pass. Plus it always has the greatest presentation, like these 1950’s Betty Crocker Bunny Cakes. I look like I’m the happiest homemaker on the planet, don’t I? I think this photo just exudes culinary competence, when in fact I can barely boil water.

If you go to the grocery store by my house and you’re wearing pants with a zipper or that aren’t made of fleece. you’re overdressed. I think that’s wrong! Now, I’m ALL for comfort — especially a Snuggie. Who doesn’t love to be comfy cozy and enveloped in a blanket with sleeves? But even when you’re wearing a Snuggie or a Forever Lazy, you can still be prepared if some Jehovah’s Witnesses or Queen Elizabeth knocks on your door. Simply add a tiara and a Manhattan and you’re dressed better than anyone at our local supermarket. This photo truly exhibits my knack of accessorizing and preparedness, as well as my love for comfortable blankets. It shows that I’m laid-back and easy-going, while still maintaining undeniable glamour. I’m a walking juxtaposition. A paradox. An enigma, wrapped in a blanket. 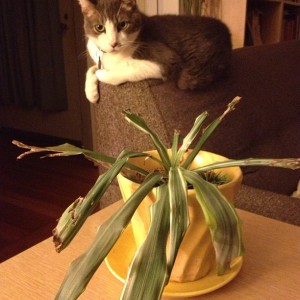 Yes, I know this isn’t a picture of me — it’s a picture of our cat, Norman. Cats are very literary creatures — writers have them, bookstores have them, and my favorite hotel, the Algonquin, has one. However, I think those cats are most likely very nice and well-behaved and don’t pee on stuff and eat plants (see above). But if having a picture of my cat makes me look like a real author, this would probably be the best choice.

Okay, so there you have it. Which one of these photos just oozes AUTHOR? Which one makes you think, “Oh, she’s working on the Great American Novel, I can just tell”? Which one makes me look the most smart and least chinny?

Sigh. I know, I know. I agree. I need to hire a professional photographer and retoucher. I’m with you.

See? I am a TOTAL WRITER. All I needed was a good author photo!

This entry was posted in Uncategorized. Bookmark the permalink.