I collect cookbooks — the weirder the better.  If it’s from the mid 20th century, with photos of extravagant fish jell-o molds or pineapples made out of liverwurst, I’m all over it.  I especially like photos of foodstuff that are supposed to be elegant but looks like it would taste worse than dog food and psychotic looking children crafting whimsical weenie dishes.  Some of them are so earnest they break my heart, which makes them even more wonderful to me.  I have stacks and shelves of books and pamphlets, and most of them have only been ogled over and never actually used to make anything.

I’m not a great cook — in fact, I’ve really just started cooking and baking regularly just recently — but I’ve decided to put these wacky wonders to better use than just sitting in the kitchen.  My friend and I put on event a couple times a year called The Mid-Century Potluck (see the latest one here) and that is fabulous, but I’ve been wanting to actually re-create these recipes on a far more regular basis because it’s so much fun.

So tonight I dug out a cookbook my mom gave me when I moved into my first apartment: Peg Bracken’s The I Hate to Cook Book from 1960.

I love this book, though as much I love the Hilary Knight illustrations (Eloise!  Mrs. Piggle-Wiggle!  Where’s Wallace!) and the absolutely hilarious text, I’ve never actually cooked from it.  But tonight I decided to make “Skid Road Stroganoff.”  (I’m not sure why it’s Skid ROAD and not Row…)

The recipe made me laugh out loud:

I love that she says to light a cigarette and stare sullenly at the sink.  I think the character Betty Draper was created from that line alone.  And then she goes on and on about how important parsley is as a garnish, because: “The reason for these little garnishes is that even though you hate to cook, you don’t always want this fact to show, as it so often does with a plateful of nude food.”  Oh, she is my hero.

So I followed the recipe (though substituting beef with turkey and cutting the salt in half — this IS 2015 and 1960, after all.  And voila:

Isn’t that fancy?  Parsley!  And I swear, it was actually REALLY good.  Jon even had seconds, though it was so rich I couldn’t.  We even watched Mad Men while we ate — it was just so perfect.

I highly recommend this book, which is still in print, all these years later!  Sure, get it for the recipes, but really buy it and read it for the writing and wit.  (“Stayabed Stew: This is for those days when you’re en negligee en bed, with a murder story and a box of bon bons, or possibly a good case of the flu.”)  She is so funny, and my God, what a relief this book must have been for so many women in 1960 who were stuck cooking and despised it.  Get a load of the introduction: 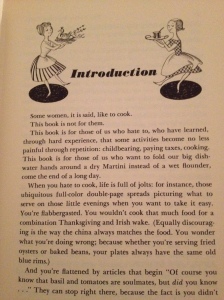 It’s so witty and so funny, and I’m so glad my mom gave it to me, all those years ago.  When I talked to her tonight and I told her, she laughed and said, “Oh, that was one of my favorites!”  I think my mom really was one of those women who hated to cook, and was only to happy to open a can of something and be thrilled at the convenience.  As a child of The Depression, the new, mid-century progress with food — cans and frozen vegetables and microwaves — was always such a thrill and convenience for her.  But if company was coming, she could whip up something gourmet and chic — so she was a little Julia Child and a lot Peg Bracken.  I, for one, am so glad about that.

So this will be a regular post — a dish I make from this or one of my other crazy cookbooks.  I’m not going to make any aspic stuff — I’m going to go for the edible.  But I REALLY want to try “Hellzapoppin Cheese Rice”…